The Day After – Maybe

Four years ago I was still stunned but trying to regain my psychological balance. Humor, sarcasm (I tried to spell that “scarcasm” and it occurs to me that it might not be that inaccurate), and snark seemed to be my primary weapons (BIG surprise:)

When in doubt, do something really  responsible,  adult-like, and  mundane! That’s the way to  be boring as dishwater!  My mother and  Sister Mary Thecla would be proud!

Well, this time around it’s better, in large part because what my brain and about a zillion pundits had said would happen has and a shit-ton of mail-in ballots got counted and more states started getting declared for Biden and very few for Beelzebub and as of the moment we need one more state of four outstanding to fall for Biden and it’s over. Well, except for the bazillion lawsuits and the threat of martial law and an actual coup…

So let’s all breathe. Drink some water.

Tomorrow may or may not have answers. But we’ll get through it. Maybe we’ll even go to space again tomorrow – there’s a SpaceX satellite launch scheduled, you can watch online in the afternoon.

In the meantime, here’s a picture of the almost-full-ish moon and Mars from Sunday night, through some high clouds. It was taken with my iPhone and a nasty blue lens flare from the super bright moon edited out in Photoshop, but it’s still a pretty cool photo for an iPhone 8. I’m trying a new app (Halide) that someone recommended for über low light and astrophotography. 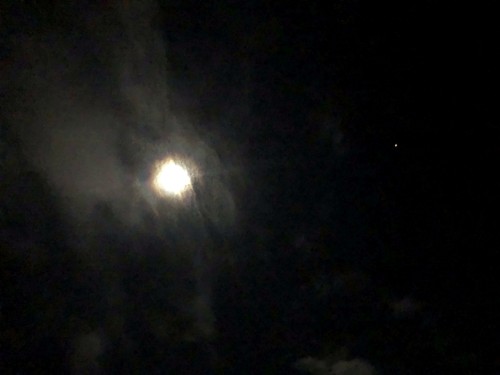 We’ll get through this, together.