On only the second trip in three years, at a con for the first time in three years, comfort and convenience are key. I knew that my usual routines for healthy eating might have to take a sabbatical for a couple of days. But the first day and a half was just BRUTAL on my dietary control.

So today I wanted to do better. Let’s start with a healthier breakfast. Forget about the hotel breakfast buffet, which not only cost $40 but also seduced me into eating enough food to feed a small battalion. Today, let’s go to that great little mom & pop family place a couple blocks down for just an omelette…

I couldn’t do it, couldn’t finish. Even with that whole “Catholic, family of eight kids, clean your plate at all costs, starving children in China” condition from birth, I was going to explode and/or die if I had tried.

But it cost less than half of what that hotel buffet did, so, winner winner!!

Well, this isn’t at the con, it’s where we had dinner. But it’s very photogenic.

Hit my critical deadline (by the skin of my teeth), got to go out in public for a business lunch for the first time in YEARS (what was that all about?!), and I passed this test, so now I get to go to my first science fiction convention in about three years.

Thinking About The Brothers K Tonight

Busy, as always, sometimes busier than busy, and at times by habit, skill (unlikely), or necessity, I get into that groove and just start grinding through things that need to get done ASAP. As noted before at times here, it’s akin in many ways to running, especially long distances such as a marathon. I truly wish I could invoke that mental state at will, but that’s another discussion.

When “in the groove” some part of my mind tends to wander while the more basic part is getting the job done. As Crash Davis said to Ebby Calvin ‘Nuke’ LaLoosh, “Don’t think – it can only hurt the ball club.” (Totally irrelevant side note – is anyone keeping track of how many times I’ve quoted that and linked to this clip?)

Tonight my thoughts turned to juggling. Juggling in turn took my thoughts to The Flying Karamazov Brothers, who I think are truly astonishing and who I first saw (I think) doing the halftime entertainment at the Westercon masquerade in 1979. (Maybe 1980?) That in turn made me wonder – are they still around?

Not doing much touring (it’s almost like there’s been a raging pandemic that’s seriously restricted travel and in-person gatherings for the last couple of years), but they do have at least one upcoming show scheduled for June and with luck they’ll be out touring soon.

Simple advice – watch their videos online, be entertained, learn to love them, and if you ever get a chance to see them live, take it!

On the one hand, good thing that trip got cancelled! I am so up to my ass in alligators between work and the hangar and year-end and budgets and tax returns and tying up loose ends and DEATH WILL NOT RELEASE ME!

On the other hand, it’s yet another thing that I would truly, truly love to do (we were going for Worldcon in DC, but because of COVID the con has turned into a bit of a “challenge” with hotels closing and facilities in short supply and moving from August to December) that I can’t because of COVID in part, but also because there’s that whole “adult” thing to deal with.

I’ll carry on. I’ll live. But there might be moments in the next week when I’m seeing reports from the convention and friends who DID make it there when I’ll be cranky.

On the gripping hand, when one door closes, another opens. One event that got written off when we were planning on being in DC this week suddenly became a possibility. And with the kids coming down…

No Worldcon For Us – Again

My calendar reminds me that right about now is when I was supposed to be finishing a long drive from LA to San Jose and checking into our hotel for this year’s World Science Fiction Convention (aka “Worldcon”).

That’s not happening. I’m not thrilled.

About six or seven weeks ago we cancelled our reservations and told friends that we weren’t going to be there. The Wings Over Camarillo airshow is this weekend and as the Finance Officer for the Wing it’s sort of critical that I be there. Last year I wasn’t (it was the total solar eclipse!) and for that I made the trip. And then had to work twice as hard for quite a while to get caught up. It was worth it (TOTAL FREAKIN’ SOLAR ECLIPSE!!) but as much as I love going to Worldcon, I have to do the responsible, “adulting” thing this year. There will be another one next year.

But as I saw the posts of friends from all over the country and even all over the world heading to San Jose, I got to thinking about how long it’s been since I’ve been to Worldcon. Then I got really depressed.

But since Montreal I’ve missed Melbourne, Reno, Chicago, San Antonio, London, Spokane, Kansas City, and Helsinki. Fine, London when I was unemployed for a while might have been a reasonable, responsible call. And Kansas City was fairly soon after I started my current job and I probably didn’t have any vacation time accrued yet. But what’s up with that Reno, Chicago, and San Antonio stretch? What was the excuse then?

I’m sure it was something along the lines of, “There will be another one next year.”

Too early to start planning my excuse/reason for missing it next year?

I’ll watch the Hugo awards and masquerade online… Wait, it just hit me. No, I won’t. They’ll be on at times when I’m tied up with my job at the air show.

Y’all have fun in San Jose. Say hello to fandom for me. I’ll be over here being adult, boring, mundane, and contemplating the similarities between a rut and a grave.

FilkOntario Draws To A Close

It’s been a most wonderful weekend. The dead penguin party continues as we wind down.

Today’s HOF concert was a singular event for me, having dear friends performing my favorite songs. I also performed my signature song, “Ronald Reagan – Carl Sagan – San Diego Pagan Blues,” for the first time in many, many years.

I have seen many old friends and made many new friends, had some fascinating conversations, learned new songs, and even dragged out a decades-old song from PFNEN to sing. (In public and everything!)

A million thanks to the FilkOntario convention committee and Filk Hall of Fame jury, especially Dave & Judith Hayman and Peggi Warner-Lalonde, who have pulled off miracles to make it all run smoothly.

FilkOntario has been wonderful! I can’t wait to come back!!

Long day. All evening doing an online task which I do not enjoy but can not avoid. Not feeling the joy.

Listening to some tunes, as I have been known to do. (BTW, someone changed the key on “Jesus Christ Superstar.” I used to be able to sing along with that. Now it’s just ugly.) Tonight it’s Julia Ecklar for reasons I don’t recall, but I’m having a good time listening again.

Given the task and my mood, I’m ready for “Temper of Revenge.” As she says on the live version on another CD, “One set of chords and you’re all lusting for blood!”

So here we go! “Bring me my lance! Bring my shield! Strong as my sword is…”

Stick a pin in that thought, I’ll be back in five minutes to wade hip deep into the demon horde, slinging entrails and limbs right and left with my massive broadsword. Right now it’s been two hours since dinner and I have to go do that blood test thing to make sure I’m not hypoglycemic.

Who knew that that’s what they meant by “lusting for blood?”

Too busy listening to concerts & chatting with friends I see far too rarely to write much. But (of course) there are pictures! 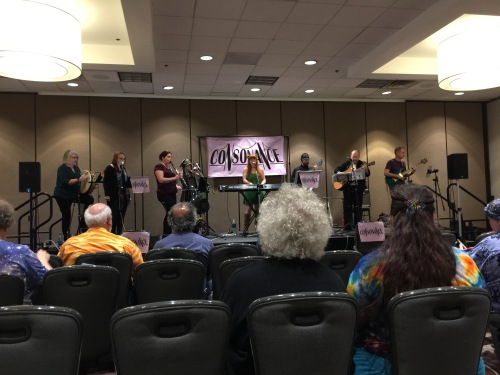 For Interfilk Guest Leslie Hudson’s concert there was plenty of help.

The Guest of Honor concert was the main event tonight. From left to right are Leslie Hudson, Mary Crowell, Betsy Tinney (amazing cello!), and GOHs Bill & Brenda Sutton.
For those I haven’t indoctrinated into SF true fandom, when I’m done having fun I’ll explain those terms.

For now, it’s the open filk: 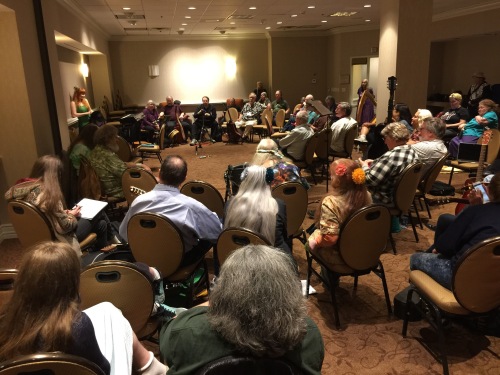 With luck, we’ll be up way, way too late doing this!

It’s been a bit disturbing for the last week or so to see more and more people I follow and talk to on Twitter and Facebook succumbing to this latest craze.

I understand and expect many science fiction and fantasy fans to be jumping on the Pokemon Go bandwagon. Hell, I would be amazed if many of them weren’t first adopters or even beta testers. No worries, it goes with the territory.

I’m not surprised to see many of that generation (including my kids) embracing it enthusiastically. They grew up with Pokemon, they’ve played the games on one gaming platform after another from teeny-tiny monochrome LCD screens all the way up to Retina display supercomputers that you can carry in your pockets.

But the number of well respected scientists, writers, and researchers that are out there trying to “catch them all” caught me off guard. Aren’t these folks supposed to be out there solving the mysteries of the universe 24/7 and tweeting about it so that I can hover in their shadow? Isn’t that the job description?

Thank god I don’t follow any celebrities or sports figures. I can only imagine what’s going on over in that sector.

Oh, right, that last one exists. WordLens will translate signs in German, Spanish, French, Italian, Portuguese, and Russian. On the fly, in real time, you can take something like this: Nope, instead we’re getting the teeming masses who are (we hope) otherwise sane and rational critters out wandering about aimlessly, staring intently at their phones.

Staring intently and wandering about as they walk into the street, off of piers, into light posts, and so on. It’s madness.

Also, watch out for the Laws of Unintended Consequences. There are some nice stories out there with Marines catching burglars while playing, people getting outside and getting some exercise for the first time in ages, and people meeting people they otherwise never would have met and finding out that they’re just, you know, people. There are also stories of muggers realizing that the Pokemon gyms and hot spots are perfectly good places to find people with expensive phones who are paying absolutely no attention to their surroundings.

Then there’s the whole Westboro Baptist Church thing. Suffice it say that anything that royally pisses off those assholes is a good thing in my book.

I guess in the end, I just don’t get it. I would love to have a HoloDeck from the Enterprise, but this seems a bit lame.

So far as my personal unintended consequences go, I was briefly saddened while reading about people coming out of their houses for the first time in ages. I missed the window of opportunity to buy stock in companies making sunblock and sunglasses. It’s okay – I realized that there was still time to invest in companies that make aloe gel and Ben Gay.