When last we left our plucky heroes…

For those of you who are relatively new to this site, in the “old days” I used to post a lot of long, multi-part posts with pictures from various trips. (Use that “search” box over there to look for “Shanghai,” “Seoul,” or “Kyoto,” or look through everything in the “Travel” category.)

Let’s see if we can get back to resuming some of those earlier collections of posts. I enjoyed them.

In summary: New York City had a life of it’s own in my head. In early August 2016, I visited there for the first time. On the first afternoon we visited Central Park and were there for hours, despite the jet lag. Day One started with a tour of the Intrepid and the Space Shuttle Enterprise, followed by the full two and a half hour cruise around Manhattan – south down the Hudson River into the Upper Harbor, up the East River under the “BMW” bridges, past Midtown and the UN, into the Harlem River, back south into the Hudson River, underneath the George Washington Bridge, past Grant’s Tomb, and finally back into port. To finish Day Two we had a death march to find a cab, went to the Mets game, left early only to miss the best part, and inadvertently stiffed a nice cab driver. Bright & early on Day Three we headed out toward Liberty Island – it’s hard to take a bad picture there, then went to Ellis Island. Bank on Manhattan, we went to World Trade Center Museum, which was emotional & grueling. Day Four started out with a trip to Times Square, after which we headed to the Empire State Building.

From the top of the Empire State Building, looking to the northwest, across the Hudson River into New Jersey. 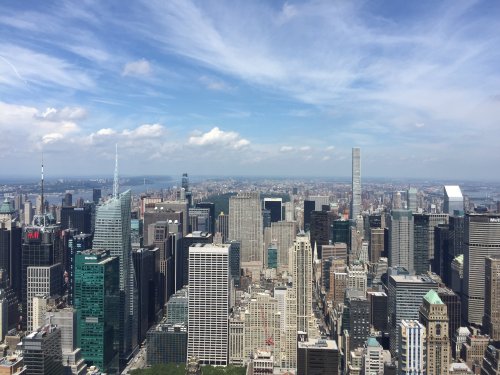 Looking almost due north. You can see Central Park starting a couple miles away.

The view to the northeast. You can see the top of the Chrysler Building, the UN Building, Roosevelt Island, the East River (which isn’t a river) and Queens on the other side. 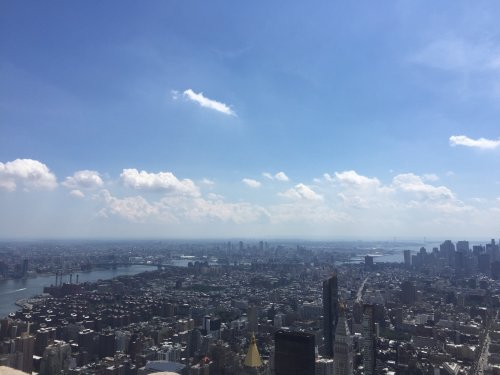 Looking southeast across Lower Manhattan to Brooklyn you can see the “BMW” bridges, or in this case, the “WMB” bridges – Williamsburg, Manhattan, and Brooklyn. Also, far, far off in the distance is the Verrazzano Narrows Bridge.

Almost due south you have Manhattan laid out before you, the One World Trade Center tower rising above it all, with Liberty Island and Ellis Island out in the harbor,  Jersey City across the Hudson.

To the southwest, Liberty Island and Ellis Island, the Hudson River, lots of very expensive real estate, and New Jersey. 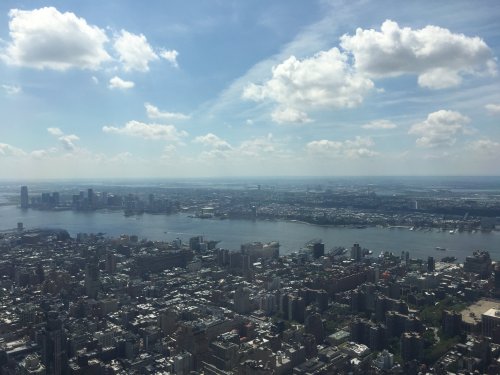 To the southwest, New Jersey across the Hudson River. (Insert jokes from “Hamilton” here.) 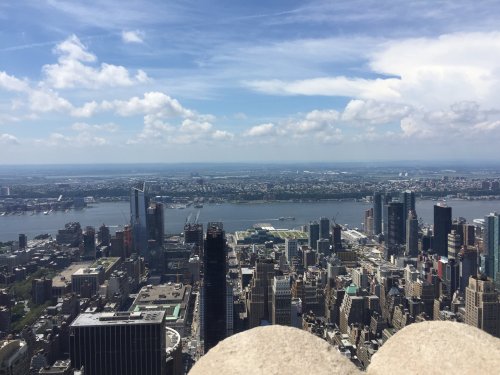 Back around to due west, across the Hudson River to Weehawken, New Jersey. In between those two groups of tall buildings by the river on the right you can just catch a peek of the USS Intrepid Museum.