As predicted, the temps went way up today. The reading in the van is always a few degrees high when it stretches into the extreme range, but it was 108° according to WeatherUnderground. 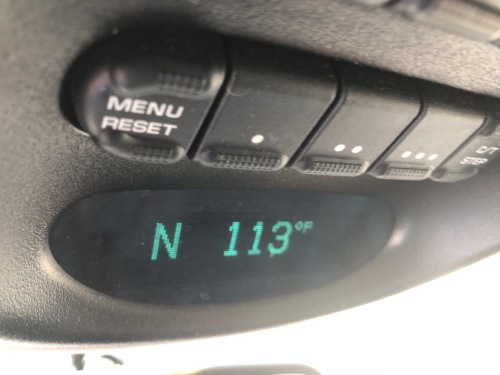 Which meant that the fires in the area went ballistic.

Even from Camarillo Airport, forty miles away, the pyrocumulonimbus clouds were seen growing all afternoon.

While cumulonimbus clouds are thunderstorms that grow from solar heating of moist air, forcing it to rise, cool, and form towering clouds that can go up tens of thousands of feet into the atmosphere, pyrocumulonimbus clouds get their energy from a really large fire. The fire literally creates its own weather.

Including tornadoes. In this case, fire tornadoes.

While fire tornadoes are seen near really huge fires, this is the first time there’s been one big enough, lasting long enough, and heading out on its own away from the fire so that the National Weather Service had to issue a tornado, or in this case, a fire tornado alert.

If you had that on your 2020 Apocalypse Bingo Card, you’re a winner!

I Hope I Don’t Die For A Stupid Reason

There was an event today, probably minor in the big scheme of things, but it was a problem at the time. In the course of dealing with that, the thought crossed my mind that, somewhere, somehow, I had heard that people had been known to die while dealing with such a problem. It was rare, it might be apocryphal, but it wouldn’t surprise me if it were true.

That got me to thinking not-so-deep thoughts about my (presumably) inevitable demise. I say “presumably” because I still like Kurzweil’s ideas about The Singularity. He might be a full of crap and just as batshit crazy as Hubbard was with Scientology, but we’ll see. Maybe I did make it in time to have medical miracles, DNA-rebuilding nanobots in my blood, anti-aging regimens, and a lifespan into the hundreds of years.

So, back to my (probably) inevitable demise. Of course, if we’ve gotta go (and we do), it would be great if we could all go saving a building full of orphans from a fire, throwing ourselves on the grenade to save our whole platoon, or anything generally noble, sacrificial, and leaving the world a better place despite our passing.

That would be great.

More realistically (I’m getting there, slowly but surely) most of us are going to die from some useless disease that has us wasting away for our last few months or years, or else some moron on the freeway is going to be texting and drunk when that light turns red and we’re going to be a somewhat squishy hood ornament.

I could live with any of those – well, maybe “live” isn’t the right term. But at least my final thoughts wouldn’t be something along the lines of, “How am I ever going to explain THIS to St. Peter with a straight face?”

Given the choice (and I won’t be), I would prefer to not die of something STUPID.

Because those methods of passing also exist all around us. The odds may be in favor of disease (eight of the top ten causes of death are medical conditions) or accidents (cars seem to be first, guns second) but there are all of those weird and low-odds accidental causes of death that just linger for us, out there in the long tail of the bell curve.

Some of those are just “sucks to be you” accidental deaths. You’re in the wrong place, wrong time, and all the planning and precautions in the world aren’t going to mean a thing. There’s a gas explosion, an earthquake, your cruise ship sinks, a tidal wave hits the beach, the plane crashes…

Actually, in my case, being in a plane crash is probably higher on the list than for most folks, simply because I have my pilot’s license and I occasionally (i.e., every chance I get) fly in old WWII planes and go fly aerobatics. I also want to go skydiving, and scuba diving, and hike the Appalachian Trail, and learn to fly a glider, and…

You get the idea. I don’t want to go out in an easy chair watching “Star Trek” reruns unless I’m at least 110. But at least none of those flying- or adventure-related deaths would qualify as “stupid” in my book.

Being hit by lightning? If it’s a “shit happens” event, fine. If you’re standing out on a golf course holding a metal club and ogling that odd-shaped cloud with your mouth open — stupid.

Watching fireworks which you dearly love and a freak accident detonates thirty tons of skyrockets all at once and you catch a piece of shrapnel while sitting a half-mile away? Not your day, sorry! Dying while making a “Jackass” video and lighting off M-80’s while drunk — stupid.

Pretty much anything that involves being a victim in a major natural disaster or catastrophe gives you a good story to tell while you’re in line at The Pearly Gates. If the National Guard, NTSB, and CNN are out there picking through rubble or debris looking for you, it’s probably not your fault. Tornado, earthquake, thermonuclear weapons, all are acceptable, at least so far as this particular idiotic rant goes.

Anything that involves the paramedics coming in and taking pictures to pass around at the station along while playing “Can You Top This?” — stupid.

“Yep, you think that’s good? We found this guy, wearing just a thong and his wife’s wig, covered in whip cream, spread-eagle, with this weird opera music playing full blast, and a goat in the room…”

No paramedics laughing so hard that they can’t even check to see if you’re still breathing. Please.

I just heard Jim Cantore of The Weather Channel describe the destruction in Moore, Oklahoma being as if whole houses were put into blenders. There was a report earlier of debris from Moore falling from the sky in the Tulsa area, over a hundred miles away.

It’s not that houses were pushed off of their foundations and folded up. These modern, sturdily built, brick & cinder block houses have been disintegrated. The FEMA and NWS folks don’t even know how high the winds were, since the instruments they use get max’d out and destroyed at those levels.

As of now, 51 dead in Oklahoma, including 20 children. 140+ in the hospital, half of them children. Those totals may well rise tomorrow when daylight returns and more progress can be made on figuring out who’s missing and who’s safe. Damage will be in the billions.

And the storms didn’t just hit Moore and then leave. The line of storms has marched east and now there are tornado watches from Texas and Arkansas into Missouri into Illinois, with severe thunderstorm warnings as far as Chicago. For example, there are reports of a tornado in or around Hannibal, Missouri. I love Hannibal, went there as a kid, have taken my family there as a parent. Take care, Hannibal!

I grew up in Kansas City, in the heart of “Tornado Alley”. I remember the sirens going off and my mother herding my brothers and sisters and I into the cellar while the winds howled.

I remember hot summer days when it was humid and roasting and clear as a bell when the thunderheads started marching up over the horizon, only their tops showing first when they were forty or fifty miles away, then marching towards us getting bigger and bigger until over half the sky was black as a coal mine with brilliant white thunderheads above and lightning flashing below while the rest of the sky stayed cloudless and blue.

Then it would be over us and it would get still and quiet for a few minutes. Suddenly the temperature would drop ten degrees or more. Out of nowhere the wind would pick up and be blowing a gale in just a couple of minutes. The golf-ball sized (or bigger) hail and rain would start and the sirens would come on and scare the crap out of us.

We didn’t have Doppler radar in the early 1960’s, we didn’t have any radar at all, and there wasn’t any Weather Channel, or cable, or even more than a couple of local television stations. I remember at one point there was a theory that you could get an indication of when a tornado was in your area by looking at the random snow & static on the TV when you weren’t tuned into a channel, a sort of precursor to Heather O’Rourke’s “They’re heeeere!” in “Poltergeist”. It was thought that there might be some electric component to the tornado, static charge or something lightning related, and that might make some sort of patterns in the random static. I remember more than once when my mom and little brothers and sisters would be heading to the cellar, I would be turning to the television to an “open” channel to look at the static to see if I could tell if a tornado was near.

These days we have tools for seeing these storms that are just astonishing. I was looking at how their Doppler radar was showing debris clouds as opposed to thunderstorms because it was sensitive enough to tell the difference between the radar echoes off of flying pieces of houses and trees and the radar echoes off of raindrops. We have TV, radio, sirens, the Internet, text messages, cell phones, Twitter, Facebook, a thousand times more detection and warning technology than we had fifty years ago – and it’s not enough.

Everyone wants to help tonight. To make cash donations or to donate blood or platelets, see the Red Cross’s site at redcross.org. To donate $10 (billed to your cell phone) text “REDCROSS” to 90999, it just takes a few seconds. If you don’t like the Red Cross for some reason, you can text “STORM” to 80888 to donate $10 to the Salvation Army.

Two other things I would recommend. First, before you donate to anyone you might not be 100% sure of (for this disaster or for ANY charitable donation), check them out on charitynavigator.org . Perhaps one of the saddest things about a disaster like this is how it causes the human cockroaches to crawl out from under the rocks they hide under and take advantage of those trying to do something good. Make sure that the money you donate gets to those you intend it to help.

Secondly, everybody and their cousin will be lining up to donate blood in the next day or two. It happens after every disaster, be it a tornado, the Boston Marathon bombing, an air crash, or whatever. That’s great, it’s needed, it helps — but blood and platelets have a very limited shelf life, only 42 days at most for blood, FIVE DAYS for platelets. So in a fortnight, a month, six weeks, two months, when the disaster has faded from memory and it’s no longer on the front page or even being mentioned any more, REMEMBER THEN TO DONATE BLOOD TOO! That’s when they’ll be running short of blood and platelets again, not this week. (And once you see how easy it is, why not just start donating whole blood every eight weeks or platelets every two weeks like clockwork – but that’s a rant for another day.)

Speaking of which, in the background the ad on The Weather Channel is the Geico ad about their customers being “about as happy as Dracula at a blood drive”. Coincidence? Random chance? Bad taste? Let’s go with random chance.