The panorama function on the iPhone is amazing, but it can give some weird fisheye lens effects.

Our view down the hill, through the trees (where the owls and unexplained foreign quail hang out) and off toward the east. If you find the right spot through the trees you can see all the way to Griffith Observatory just north of downtown LA.

That sidewalk? It’s actually a circle around the backyard and from this point stretches out to my left and right behind me, back toward the house. So while it looks like I’m standing at the top of a deep ravine cutting into the hillside, in fact it’s convex, not concave.

Have a quiet weekend, folks. God knows that I’m exhausted and can use a couple days off, with a short week and a four-day weekend ahead. I feel like I’m just barely going to make it to the finish line. I’m sure many (most?) of you know the feeling.

Keep breathing. One step at a time. Don’t panic!

No Context For You – November 19th

1 – I’m so glad that I even remembered how to tie one. 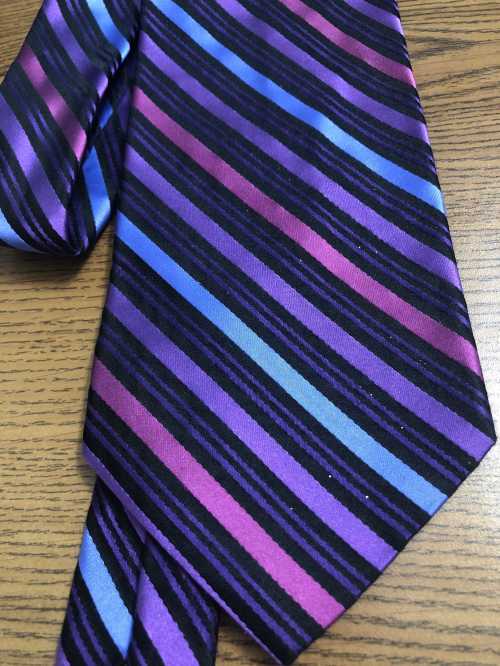 2 – That’s not dandruff – there are little sparkly threads woven into the material.

3 – Wow, November 19th must be a tough day in my life! Typically the days when I’ve been beaten heavily about the head & shoulders (see, no dandruff!) are when I cop out, don’t want to write anything elaborate, and do a “No Context For You” post. It’s a shortcut. And WordPress, if you feed it the same post title, will add a “-1” to the end. This permalink is “no-context-for-you-november-19th-3” so I’m seeing a pattern here. That’s got to be four years in a row or four out of the last five or six when this date on the calendar was a “holy shit, I’m exhausted!” sort of day.

What do hummingbirds sound like when they know the words?

The “humming” sound that hummingbirds make comes from their wings beating at 50+ strokes per second. Many (most?) folks think that hummingbirds to not have a song like other birds, but that’s not true. I’ve often heard them – it’s a sharp, almost electronic sounding, clicking noise.

Normally I hear a couple of clicks at a time – today, even inside the kitchen with the screen door open, I could hear one hummingbird just going nuts, emitting just a constant barrage of clicks. I could see it darting around the fruit trees and figured that by the time I got outside it would have stopped or it would have flown off, but that didn’t happen.

Warning: you’ll have to turn it up a fair amount, I couldn’t get too close and it’s not that loud of a sound.

This is an edited down video for filesize management, only ten seconds. He had been going on like this for several minutes before I went out, and the entire video I have is almost two minutes long before he finally flew off, still clicking.

If you read my babblings with any regularity, you’ve met the yard lizards. In particular, the one I’ve taken to calling “Dr. Lizardo.” 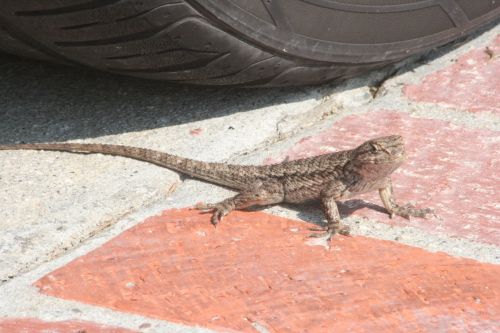 She usually hangs out all the time right at the edge of the driveway, underneath the car, where she can get to shelter (and shade if necessary) quickly. 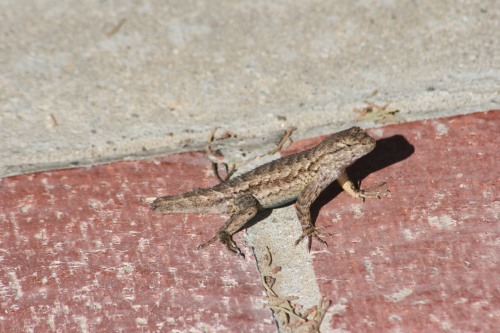 She recently must have had a close call. (I’m starting to assume it’s a “she” since in my research about hibernation I came across several notes that the females tend to be larger than the males, and she’s the largest in the yard. It’s a guess. On the other hand, they also talked about males having the colored bellies which they display when they do “push ups” as a territorial dominance display, and we’re seeing that in these latest pictures, so actually, who knows?!)

After those last pictures were taken three weeks ago, I saw Dr. Lizardo almost every day for a few days before we hit Daylight Saving Time ending, Halloween, and a patch of much cooler weather (only into the 60’s and low 70’s) for about ten days. Since then we’ve had a couple of slightly warmer days (low 80’s) but mostly cooler and I’ve noticed that Dr. Lizardo has not been seen in the last ten days or so.

She’s always there if I go out to get the trash cans or mail, or just get up to walk around and get some sun and air during the day. Now she’s not.

I checked and mid to late November is normally when Western Fence Lizards will start to hibernate until February or March, although they can come out to bask on sunny days. So it’s entirely possible that it’s just a timing thing and she’s off sleeping away the rest of 2020 (like wouldn’t we ALL love to do that!) and we’ll see her when the days start to get longer again.

But given that missing tail, I worry. Obviously the hiding spot under the Volvo isn’t quite as safe as she thought it was. And there are an awful lot of crows about suddenly, and they would snap her up in an instant.

There was a so-so ISS pass over SoCal tonight. 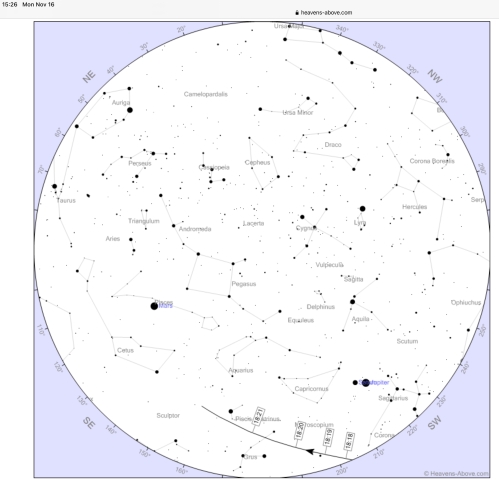 It was low, it was only a partially visible pass, I’ve got a street light smack dab in the middle of that view from my front yard so I would have to go down the hill a ways to see it…

The SpaceX Dragon spacecraft that was carrying four astronauts (three from the US, one from Japan) was about 7km from ISS, getting ready to dock. I was hoping to be able to see the two of them flying together, like a double star cruising across the sky. 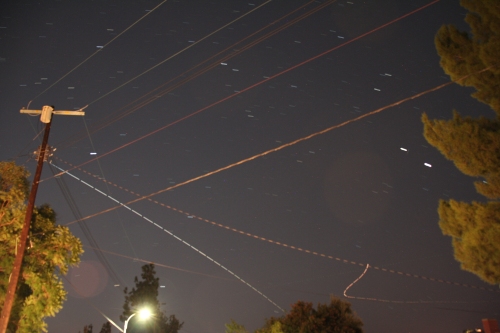 AND THERE THEY WERE!!!

Coming up from the center bottom toward the top of that telephone pole (ignore all of the power lines, and that plane heading off toward Camarillo) is the trail of the two spacecraft. It fades into orbital night just as it passes the pole.

Here are the blown up version of the last three five-second exposures, from right to left. You can see how bright the streak is on the right, fading in the center, and going quickly to orange, red, and black on the left.

I wasn’t at all sure that I would really be able to see the two vehicles as discrete points of light since they were so close, but it was quite distinct and amazing. The pictures don’t show it well because: a) the long, five-second exposures blur the two together since they’re traveling in the same direction, and; b) that stupid issue I’m still having with getting this lens to focus for astrophotography.

Nonetheless, click on that wide combination of three images to blow it up to full size. Look at that middle image. As the two started to fade and get dimmer, they start to not record photons over the top of each other and you can (kinda? sorta?) see that there are two streaks there right next to each other, not one large streak.

And of course, shortly after this, we got to watch this:

The hatches are open and NASA's @SpaceX Crew-1 astronauts Shannon Walker, @Astro_Soichi, @AstroVicGlover, and @Astro_illini are the newest residents aboard the @Space_Station. Welcome aboard! pic.twitter.com/WYwC7jRVQk

It was windy earlier in the week. 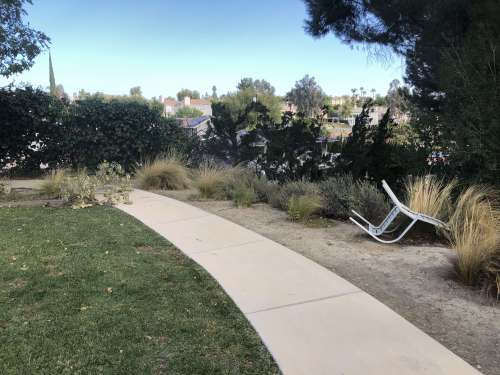 If it’s windy enough the chairs can get tipped over, but this time it almost went over the edge of the hill. 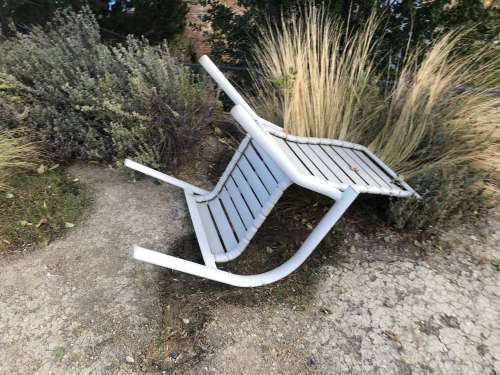 In addition, we lost a branch of of the big tree in the back. 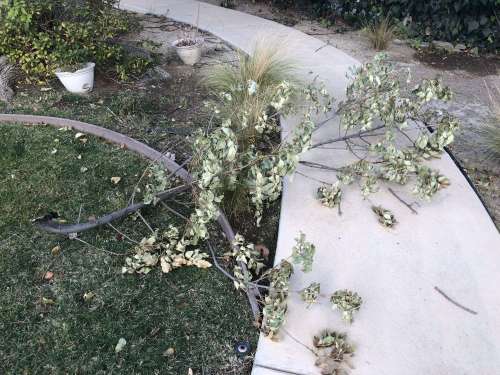 We will rebuild. No need for a Go Fund Me…

THEY’RE ATTACKING OUT OF THE SUN!!! 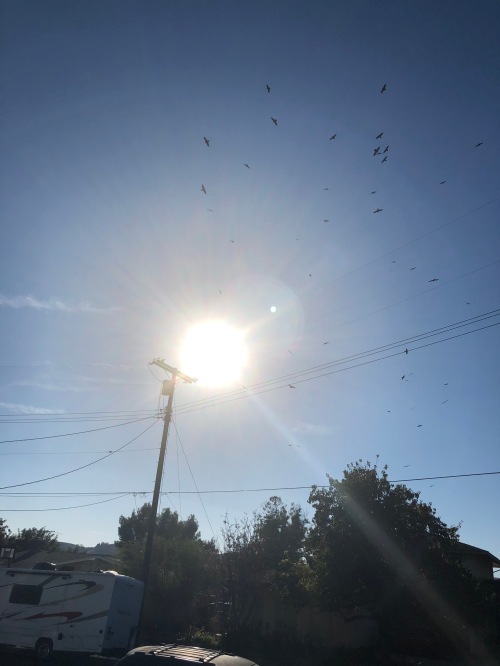 If a large group of crows is a “murder,” this must be a mass murder. There at least 42 of them here (that is the answer, after all) and it was hard to keep track as they were all wheeling about, some joining and leaving all the time.

Regardless of the exact number, that’s a LOT of crows.

Stupid backstory – lots of time in the back seats of station wagons as a kid, learned to play lots of “license plate games.” Now I have a “January baby” car so I get to be one of the first to get the next year’s California registration tags.

Again this year I haven’t seen one of the 2022 tags yet, which isn’t surprising since I go out and drive maybe twice a week to go to the grocery store and maybe get food for takeout. So I win! I have the 2022 tags!

(How bad is 2020? This might end up being one of the highlights that gets mentioned in our annual Christmas card letter…)

Someone mentioned their grandmother in a very moving and touching Twitter thread (she had come out to her family, terrified that they would reject her, and her grandmother in particular had done quite the opposite) and I got to thinking about how I never knew either of my grandmothers much.

My maternal grandparents both died before I was born (the result of my mother being near the bottom of the sibling list of a BIG family) and my paternal grandmother died when I was only four or five. (There’s a family tree around here somewhere, but who has time for that?) My few and hazy memories of her are probably more from the pictures and movies I saw of her than any actual memories of my own.

So if you have grandmothers, and they’re one of the good ones who are kind and thoughtful and giving and caring and nurturing and not one of the bad ones who torture their kids and make them sweep the ashes and cinders out of the fireplace and poison them with apples (I might be mixing my Disney metaphors badly here, but I’m really, REALLY tired) then give them a hug for me when COVID’s over and you can do that without infecting and killing them. In the meantime, just give them a call and tell them you love them.

Grandfathers, too. Same rules about good vs. bad, just substitute in some gender appropriate (or in this case, appropriately, some gender neutral or inappropriate) examples.

Damn, I’m tired. I need a grandmother to tell me it’s going to be all right and I’m doing great. And then give me cookies. 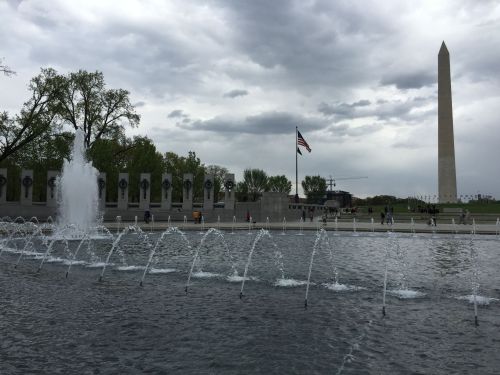