The good news, of course, was that as expected over the last couple of days, Day Five of the 2020 election finally got enough votes counted in Nevada and Pennsylvania (Georgia and Arizona are still up in the air, even now) to push Joe Biden over 270 electoral votes and the networks and news organizations both domestically and internationally all declared him the President-elect.

Of course, the whiny, spoiled, guanopsychotic man-baby in the White House who made the last years such a shit show is threatening to sue everyone and everything and never, ever concede defeat. But so far there’s not a single shred of evidence that he has a single fact to back up his insanity (pretty much like every other day of his regime’s atrocities for the last four years) so I don’t see that going far.

In the relief and realizing that we had been holding our breath for days and days and days (“I’m going to hold my breath until either I or Georgia turn blue” was one comment I saw), there was a tremendous release of adrenaline in the celebrations. Watching the outpouring of joy across the country made me truly realize just how much stress we had all been under. Even though it’s not over, I think we can see the finish line from here. Please, sweet baby Jesus, let us be seeing the finish line from here…

An hour after getting that great news, because of course life has to be a freaking roller coaster ALL THE TIME, I got this on my phone: 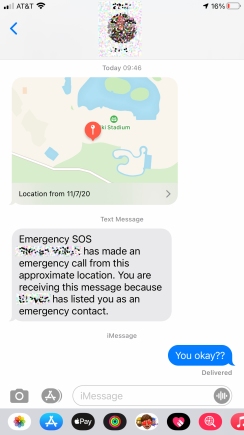 Again, the adrenal gland is designed for speed over accuracy, that whole “better to ask forgiveness” thing in a wetware implementation. The brain took a second to go, “Oh, his phone just got triggered and went off after detecting an ‘accident’ because he’s riding roller coasters at that theme park there.” (See, I told you it has to be a freaking roller coaster ALL THE TIME!) I’ve had my iWatch detect an ‘accident’ when I was hammering on something and set off my phone’s “ARE YOU OKAY??!!” response. And yes, that’s what happened and he’s fine.

But between the stress of this entire week and the stress of this year and the release of relief and then this shot of adrenaline, well… I’m sure there are a fair number of you out there who will agree that the whole country could really, REALLY use a good night’s sleep.

Sleep in tomorrow, forgive yourself any tasks that you think are critical and don’t get started early enough. Skip church if that’s your thing, or at least allow yourself to be late. God will understand – tell him I said it was okay. If you have to watch the 10:00 football games (the Chiefs are an early game tomorrow, damn!) maybe watch it from bed instead of after being up and running around doing errands and housework for four hours already.

That’s the word of the day. It fits.

My phone started nagging me this evening because it can tell that I wasn’t on my way to downtown LA to see “Hamilton” at the Pantages. 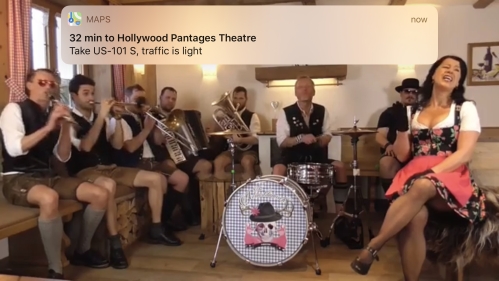 It can tell that because it can read my email, but apparently it’s not smart enough to read the news and understand that “Hamilton” has been cancelled due to the 128,000 dead Americans and total lack of any sort of sane response by the excuse that passes for the US government right now.

But that’s not what I came here to talk about.

That’s a somewhat… “disturbing?” image that was on my screen when that nagging message showed up, wouldn’t you say?

Actually, it’s quite wonderful, in a disturbing sort of way. It’s what I was watching, while waiting at a great BBQ restaurant pickup lot, waiting for a birthday dinner. (The birthday, not mine, was a high point of the day, BTW.) I was watching it because one of the folks I follow religiously on FaceBook and Twitter recommended it:

On FaceBook, he said, “Trust me.” Yes, you should. This is truly fucking awesome. And bizarro.

No Context For You – April 15th 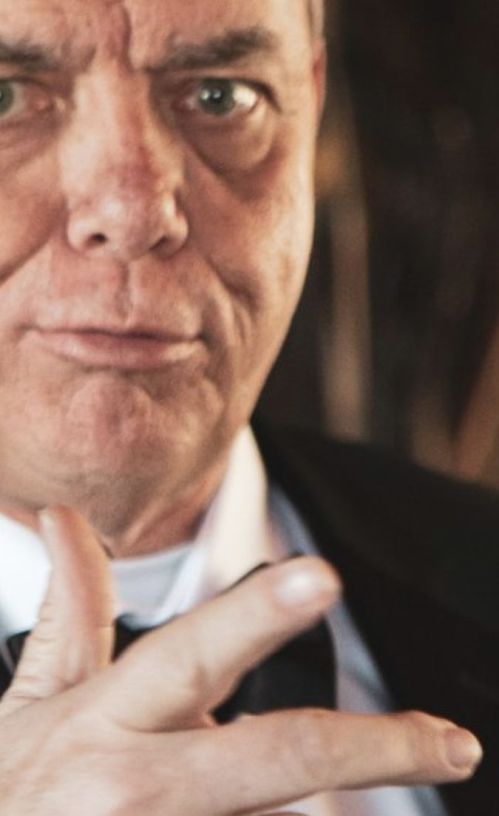 You had to be there.

No Context For You – November 09th

There’s something tantalizing here. Almost enough detail to recognize where and when I inadvertently pushed a button and saved an image without realizing it.

Sorry, it caught me off guard today.

Way back at the beginning of the year I wrote about how last year became the “year without Christmas” for me. That wasn’t necessarily a bad thing, given what I got to exchange Christmas for, but it was odd. (And to answer the question posed at the end of that article – right here at home, given the nature of the business at my new job.)

But then 2019 has had its own unique sets of “challenges,” many of which have impacted other holidays, both societal and personal.

For example, between 2018 and 2019, it’s the first time in forever that we didn’t go somewhere to watch fireworks on July 4th. Oh, from the new house, which is on the top of a hill, we can see them off in the distance – but it’s not the same.

Labor Day or thereabouts used to be Worldcon. Maybe not every year like when I was in college or soon thereafter (i.e., before the kids arrived) but usually at least 2 out of three years, or three out of five. Now – nothing since 2009. Hell, we didn’t even get to the Worldcon in San Jose last year!

Our trips to the movie theaters have plummeted. We used to go at least once a month – now it’s once or twice a year. Maybe.

Halloween at the new house has been a non-event for two years in a row now. We used to have so, so many kids come by and bring out the telescopes. Now, even though we’re only a mile away, we might as well be on a rural highway halfway between Renwick and Hardy, Iowa.

So here we are in early November and Thanksgiving is less than three weeks away. We’ll be doing…what?

And Christmas is only six and a half weeks away. We know we won’t be traveling, but will the lights and festivities and decorations and celebrations be up to our familiar standards?

One might start to think that we’re doing this “adulting” thing incorrectly.

(Thank you for attending my TED whine!)

We still have family in town following the wedding, including a three-year-old who loves stars and moons and planets.

So dragging the scope out onto the back porch with a dusty mirror in a light polluted city and showing her the crescent moon probably worked just as well.

I am the Funcle.

Scattered Back On The Winds

Having gathered family and friends from the four corners of the globe (literally), with the festivities completed (and they WERE festive!) it was time today to scatter the children back on the winds.

The Older Daughter had to be back at work this morning in Northern California, so she made the long drive back last night. 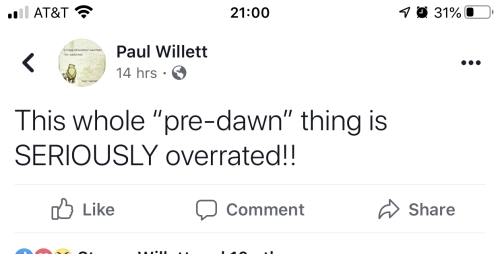 I was up way too damn early to drive The Son to the airport, which not only completely played “52 Pick Up” with their pick up traffic (taxis, Uber, Lyft, etc are now off in an off-site lot which no one can find and no one can figure out how to get to or from) but which also appears to be 100% under construction. 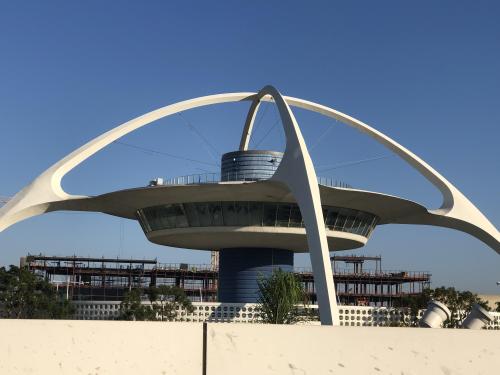 Then the Younger Daughter and her newly minted husband, The Son-In-Law, took off for their honeymoon.

So as we speak, one is in a plane to Asia near the end of an eleven-hour-plus flight, and the others are near the US/Canada border on their way to Europe.

And tomorrow I’m back to the office to play catch up after the long weekend.

Time to go looking for a new normal, a new routine. It’s been magnificent, but I really could use a little bit of boredom for a few weeks!

That was quite the wedding! A good time was truly had by all.

Today was the third party in three days, this time for The Long-Suffering Wife’s family. 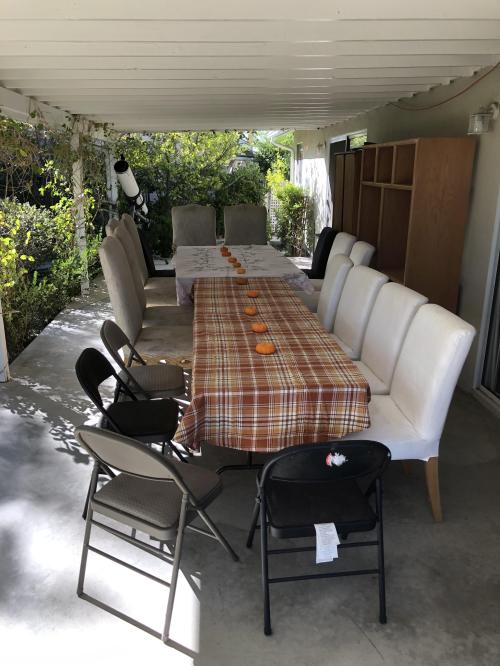 Again the back yard in our entertainment-friendly home was pressed into service – again a good time was had by all. There were babies there as well, which explains the stroller/jumper that had been sitting in the living room (a serious source of conversation for those visiting for the first party!). In addition to the brunch and mimosas and champagne, there was T-ball, coloring books, and a little bit of poop.

There was also virga, much to my surprise. 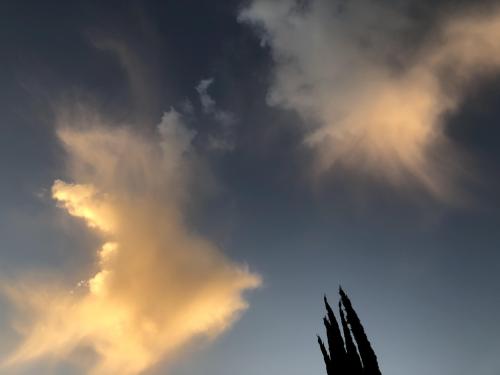 Yesterday the amount and scope of the virga in the area was much, MUCH larger and we actually got some brief showers earlier in the day when I was taking people back and forth to the wedding venue. Imagine my surprise when, with 0.00% chance of rain in the forecast for the next ten days, we had to worry a bit about rain (it was a partially outdoor venue) when for weeks we had been worrying about the threat of fire.

Finally, did *I* have a good time at my daughter’s wedding? 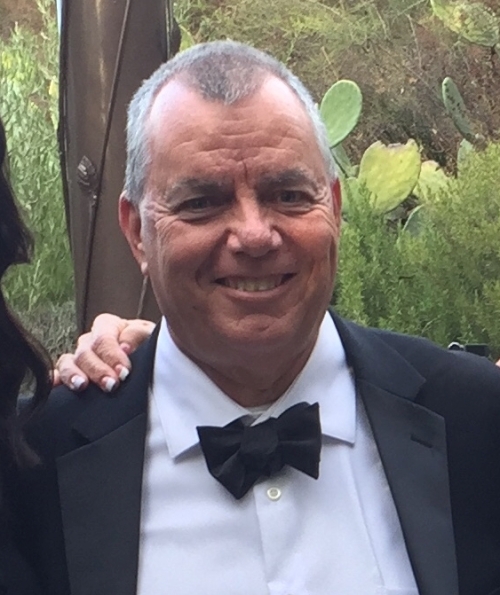 (Photo taken by my brother-in-law)

You bet your ass I did!

(Yes, I also tied that bow tie all by myself, for better or for worse. Why do you ask?)

Now to get folks to the airport, back on the road home, or off to their next vacation destination. We’re in the home stretch!

A Most Wonderful Wedding 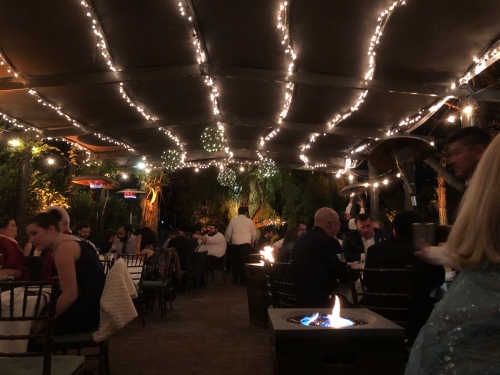 Talk amongst yourselves – we’re going to carry on and party for a while! 🎉🍾🎈

Which it really wasn’t, at least in the strictest sense of the term. There was no rehearsal for tomorrow’s wedding.

What it was was a chance for the bride and groom to spend time chilling and schmoozing with their friends and family, many of whom had come from out of town, out of state, or even out of the country. That mission was accomplished.

A good time was had by all.

We were more than happy to offer our place as a venue for the celebration. We do love how entertaining friendly this house is. It’s fun to make it happen, especially for our daughter and her fiancé.

It’s one night in particular when I miss the old house.

We always had hundreds of kids coming by. Families. Teenagers. Little kids. Pets.

If it was clear we always brought out the telescopes and let everyone take a look. It was magical.

No more. Last year I think we had a small handful of trick or treaters, a dozen at the most.

This year, not a single person stopped by. We’re at the top of the hill and off on a side street, but I didn’t even see anyone on any of the streets leading into our tract when I drove home.

Maybe it’s the fires. There’s another big one going off tonight, over 5,000 acres already in just a few hours. The “good” news for us is that it’s off in
Ventura County and doesn’t seem to be a threat to our wedding plans for Saturday.

Let the partying begin. Halloween’s over and was something of a bust (although we did have a fun Halloween lunch party at my new office!)…

…but the wedding weekend is going to be AWESOME!