Out on the town two nights in a row!

I’ve spent my share of games in nosebleed seats, but tonight will not be that night.

This will be quick – I just came up for air from being buried in accounting and righteous indignation on social media and realized it’s 23:59

But we’re close to the ice.

Look up there, way up in the rafters, just to the right of the bottom of the scoreboard… 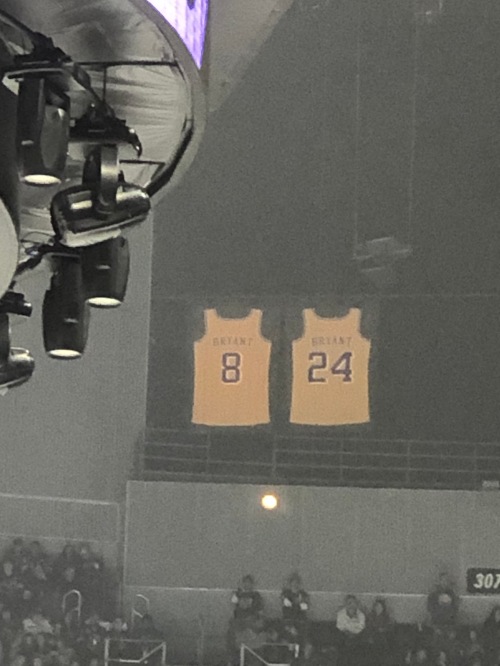 …we were still in the Kobey mourning period. (We might still be, I lost track.) 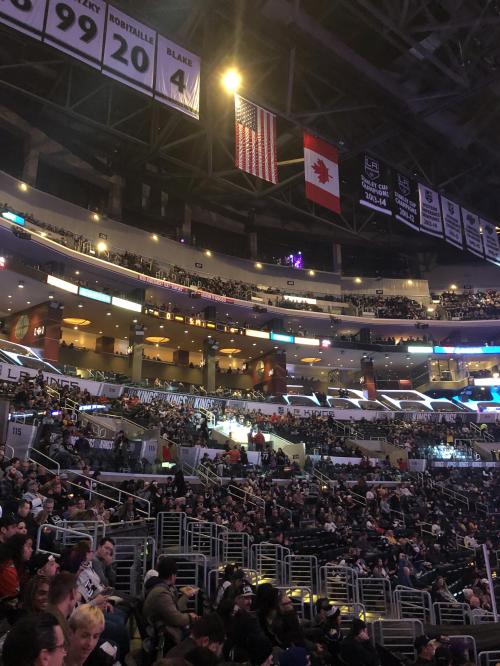 There are some very fancy luxury boxes here, and up in the rafters at this end…

The Son showed up from Japan for our Super Bowl party tomorrow. He would have gone to Miami, but we were his second choice.

Since he was here, and since the Kings were playing the Ducks, we got tickets so he could surprise the Younger Daughter. (She figured it out.)

The area around Staples Center is insane right now with tens of thousands of people here for the Kobe Bryant memorials.

But we’re here for the hockey game.

We got great seats – now we need to win!

The LA Kings have their first pre-season games tonight (it beats repeats of Hallmark movies that I’ve seen multiple times) but the game’s not on either television or radio. I finally found out that it was on the iHeartRadio app, so I downloaded the app and created an account. I found the game, but also learned an interesting lesson.

I’m hardly a prude and I have a vivid imagination, but there are apparently things out there that are so far out of my range of experience that words simply fail!

And not one of those suggestions mentioned either of the Davies brothers!

No Context For You – November 19th 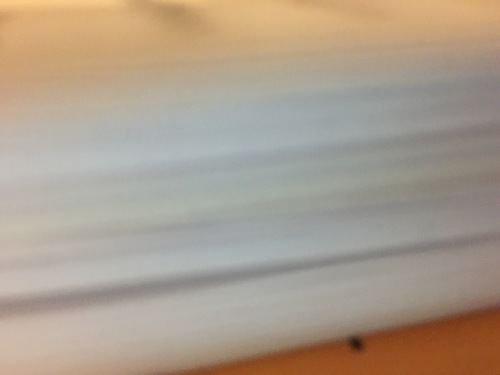 Regards pretty much nothing, after my beloved Angels missed the playoffs for the third season in a row, I was pleased to see my beloved Kings start off hot and have the best record in the NHL after a month or so, and my beloved Chiefs were the last undefeated team in the NFL when they were 5-0.

…when do pitchers and catchers report to Spring Training in Arizona?

My beloved LA Kings lost and got eliminated from the NHL playoff race last night – but today is opening day for my beloved Angels, so it’s hard for it to be a bad day.

I was thinking about what it would take to make Opening Day a bad day. Something pretty horrible would have to happen to take ODJ (Opening Day Joy) away from me. And nothing horrible happened.

Neither I nor anyone close to me died. Or got a terminal cancer diagnosis. Or lost a limb. Or an eye.

I wasn’t maimed in a huge car accident. I wasn’t in a plane that crashed, or a train, or on a ship that sank.

My house didn’t burn down.

I didn’t get fired from my job.

There wasn’t a 9.9 earthquake that made California drop into the sea.

So it’s Opening Day and all is right with the world.

Goodbye, March – Don’t Let The Door Hit You In The Ass

In what was a pretty high stress inducing, low stress relief, royal pain in the ass month, there were at the other extreme some pretty good times. There wasn’t a lot of middle ground it seems.

Without whining and bitching, let’s just say that this time of year, being in charge of two different accounting departments, both for non-profits that are living up to that descriptor, has been…”challenging.” There have been a lot of hours and a lot of wondering, “Okay, how do I solve THIS one?”

Yet here I am, still (more or less) on my feet.

Meanwhile, there were two very lovely weeks where it was great to see my son home on leave. He’s in the US Air Force and was finishing a couple of years there and heading towards a couple of years over in this other part of the world, so it was great to see him again. To their credit, my boss and co-workers did a great job of kicking my ass out of the office to go to hockey games and baseball games and conventions with him. (To be quite clear, while the job has its good days and its bad, the people I work with are wonderful.)

The hockey was nice, even if my beloved Kings are hanging onto their playoff hopes by a thread with a week to go. But baseball starts on Sunday and hope springs eternal, even if my hockey team is checking out tee times.

The convention I went to last week was a ton of fun. I saw lots of good friends that I hadn’t seen in a while, in some cases in a long while. I could stand to do that more often.

We made plans, plane tickets, hotel, and car rental for our trip in August to see the total solar eclipse. More on that later, I’m sure!

And despite it all, I have managed to make some progress in the last few days on a number of long-range issues. There’s some satisfaction there, despite the two-steps forward and one-step back nature of it sometimes.

While I can itemize many good things that happened, over it all hangs a pair of clouds – I’m so freakin’ tired all the time, and I dread turning on the news or looking at what’s happening in politics. Both of those things are such a constant drain.

Yet we carry on.

Now we waltz into April. And the jokes are already filling up Twitter and FaceBook. Let’s hope there are some good ones. I could use them. We all could. 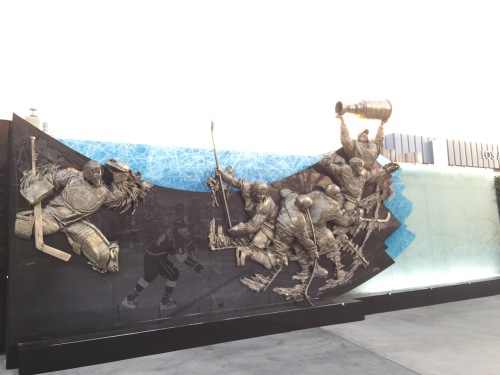 The Kings need to stop screwing around & win a bunch of games in the next three weeks or we’ll be watching the playoffs from home.

If you live in Los Angeles long enough – and I’ve been here over forty years – you will sooner or later bump into a celebrity.

I’ve never been one to slobber & squee over meeting an actor or actress (astronauts are a whole different thing) but that’s not to say there aren’t celebrities and people that I wouldn’t love to meet. My criteria for squee-worthiness is just different than most people’s.

Today we got a great opportunity to meet someone I admire.

We were eating at our usual Sunday morning, pre-grocery shopping spot. Just as we had sat down, a couple of guys down the aisle were finishing their breakfast and started to walk past us.

I thought that I recognized the one guy as he got by our table and I guess it was the look on my face that make The Long-Suffering Wife look up as he passed. He paused at the corner of the aisle a couple of tables behind us and she saw him, looked at me, said, “Is that…?” I said that I was pretty sure it was.

Never one to be shy, TLSW looked at him, gave him a big thumbs-up, and said, “Go Kings!!”

Bob Miller, the NHL Hall of Fame play-by-play announcer for the Los Angeles Kings for the past forty-three years, then proved just what a gracious and kind person he is.

He could easily have just waved, given us a return thumbs-up, or whatever and it would have been just fine. He was just going out to breakfast on a quiet Sunday morning and didn’t owe us squat.

But he came over, introduced himself, and chatted with us for a couple of minutes. I was glad to see him looking healthy and back with the team after he had some major surgery last year that kept him out of the booth for the last couple months of the season. With the Kings’ season ready to kick off in just four days, we talked about the prospects for the year. I told him how much I had enjoyed his work for years.

We’re big hockey fans, and the Kings have been my team almost since their beginning. I was with them through all of the so-so years in the 1970’s, through the Gretzky years when everyone was jumping on their bandwagon, at the Forum and now at Staples, and through their first two Stanley Cup championship years. (This upcoming year will be their third!)

As far back as about 1976 or 1977 I can recall hearing his iconic, “He shoots! He SCORES!!” call on hundreds and hundreds of Kings broadcasts. Two years ago, when the Kings beat the Islanders for the Stanley Cup and I was in the Hartness House main living room in Springfield, Vermont while the Kings went into overtime and then double overtime, I had to celebrate alone and very quietly as they one, lest I wake up the entire building – literally!

Through all of that, Bob Miller has been to the LA Kings broadcasts what Vin Scully (who we also dearly love listening to and will miss now that he’s retired) has been to the Dodgers broadcasts and what the late Chick Hearn was to LA Lakers broadcasts. Los Angeles has been graced with three of the greatest, iconic announcers in their respective sports over the years, and it was a pleasure to get to meet one of them.

We’re looking forward to hearing the broadcasts with Bob behind the microphone starting this week. As well as watching him get champagne poured all over him next June. I won’t be in a small hotel in Vermont then, I’ll be in the stands, cheering my stupid head off.